Donald Trump rose to power upon a coalition of white supremacists and those willing to look the other way as long as he delivers higher profits.  If the profit margins decline, this coalition will collapse.  Those who are opposed to Trump and the toxic values he represents must loudly proclaim that we will not continue to fuel an economy that has no space for human values.  Despite the damage Trump is doing to our planet and democracy, the economy will keep rolling happily along as long as we keep buying the crap transnational corporations are churning out.  We must protest — but if we do so by flying to Washington and buying Starbucks before the march we provide economic support for his policies that nearly cancels out the political pressure.  Instead, we must temporarily opt out of the financial growth machine and turn our attention to building new communities, institutions and enterprises.  Throw a fundraiser in your living room: dance and laugh and eat homemade food, then give the money you and your friends would have spent on a night out to Planned Parenthood or the ACLU or Black Lives Matter or some delicious mix of your own devising.  Together, let’s turn away from the glossy, empty facade capitalism has distracted us with and look at our own lives anew.  If the corporate world stops driving us towards our doom, we can make it rain discretionary spending once again.  If not, we will find smaller, kinder, more natural ways to meet our needs. 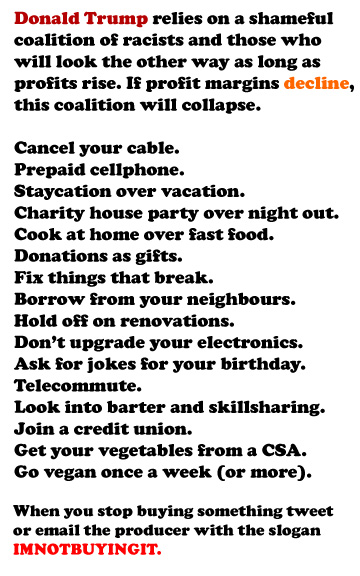 To participate, buy less (or buy differently) then tell companies why with the slogan IMNOTBUYINGIT.  Making a habit of asking yourself ‘do I really need this?’ will help you make better, less impulsive choices.  If you choose not to upgrade that old smartphone you hate using, you will also be choosing to spend more quality time with your family.  You might discover a local restaurant that makes you feel at home in a way that McDonald’s never could.  You might spend more time at church or mosque or synagogue and less at the mall.  Buying fewer things is also good for the environment in any political climate.

Choose the cheaper one. Buy tofu over beef.  Staycation instead of vacation.  Invite your friends over instead of going out.  Live in your parents’ basement for one more year instead of moving out.  Cancel your data plan and milk that free wifi.  Instead of renovating, wait another year (you’re busy anyway).

Choose organizations that put values before profits. Instead of giving mass-market gewgaws as gifts, donate to a charity.  Buy a subscription to a newspaper that holds high standards while struggling to make ends meet.  Treat yourself at a church bake sale.  Choose a social enterprise or a co-op over a private business.  Choose fair trade or union-made.  Choose companies that proudly pay a living wage.  Buy tickets to a museum or dance performance or any other non-profit cultural institution. We need honest enterprises providing services, making goods and creating jobs.  We don’t need companies willing to do anything to make a buck.

Changing habits can be hard, so we encourage you to partner up with a friend to keep each other honest.  Go through your visa or debit bills line by line and see what you can cut. Choose one thing you will stop buying and send that email THIS WEEK.  This change may seem impossible given the rhythms of our daily lives, but we don’t have to be perfect.  Just stop and ask yourself ‘do I actually need this’ each time you are about to buy something.  As this question becomes a habit, change will come more and more easily.

While a recession attributed to incompetence would likely end Trump’s presidency, our movement will be more effective if it is visible.  In that regard, we should all adopt two simple tactics:

1) Whenever you choose not to buy something send an email to the company you avoided with the subject line IMNOTBUYINGIT telling them what product you almost bought or used to buy, but chose not to.   Make the email polite but direct, tell the company what you like about the product, why you used to buy it and why you stopped.

2) Consider tallying up your savings and tweeting them or posting them on Facebook with the hashtag #IMNOTBUYINGIT. 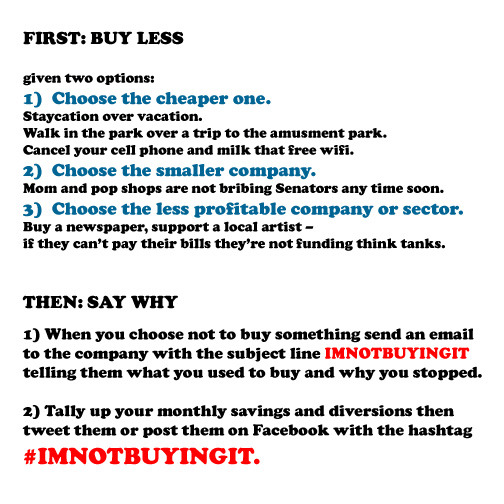 But why not a targetted boycott?

Capital operates on a single rule: buy low, sell high.  As a result, capital ‘believes’ only in its own growth.  Democracy is different.  Democracy is driven by humans and their beliefs.  Humans do not necessarily believe in growth.  We value different types of things and practices and judge growth as good or bad depending on what is growing.  We certainly do not believe in the infinite compounding of the status quo.  However, many capitalists, especially those with heavy investments in specific assets, have tried to distort public opinion and democracy to their advantage.  As ‘trickle-down theory’ has grown less and less appealing, many capitalists have echoed and amplified cultural views which they themselves may or may not believe in order to gain political power.  These problems aren’t limited to the U.S., power-hungry politicians are eagerly stirring up hate and disinformation in Canada, the United Kingdom and many other countries as we speak.  This is nothing new.  Unfettered capitalism has a long history of exploiting cultural and geographic differences in horrific ways — slavery and colonialism were amplified, if not outright driven, by capitalist opportunism.

In Donald Trump, this long disinformation campaign has created a monster.  Climate change denial, misogyny, homophobia, Islamophobia and white supremacy are particularly toxic cultural values to amplify and exploit.  Protests, legal challenges and democratic organizing are all vital tools, but we will not win so long as there is money to be made distorting democracy.  But capital will abandon white supremacists and climate change deniers just as heartlessly as it has abandoned refugees and the environment if it doesn’t see a path to profit.  We are already seeing divisions between those capitalists most reliant upon the state to defend their profitability (oil companies, private prisons and the military-industrial complex come to mind) and those who are more confidant that they will remain profitable in a more human political climate (tech companies and retailers among others).  We must widen this gap by pressuring the economy as a whole and constraining profits.  We must make distorting democracy a losing proposition through targeted actions such as boycotts and strikes.

Think of IMNOTBUYINGIT as an umbrella boycott, highlighting and connecting the many moral spending choices people are already making (both through organized boycotts and invisibly of their own accord), while also giving people a wider range of ways to participate.   Projects like grabyourwallet, #deleteuber, Injustice Boycott, defundDAPL target the companies that fueled Trump’s rise and the decades of propaganda that preceded it.  These are important projects — but tracking all of capital’s incursions into our democracy and public discourse is impossible even for a large organization, and following those findings and acting upon them in our daily lives is harder still.  Many people who want to get involved will find they didn’t spend with any of these companies in the first place — or they will find that making the switch is just too logistically challenging right now.  We need to give these people more options.  Capitalism is so successful because its logic — buy low, sell high — is simple and widely applicable.  We need a rule of thumb that’s just as simple: spend less until capitalists abandon their efforts to control our democracies.  After we get what we want, we can make it rain discretionary spending once again.  If the corporate world can’t or won’t adapt, we will find smaller, kinder, more natural ways to meet our needs.  Just as there a million ways to make money, there are also a million ways to spend less and we must all choose those that work best for us.  Some people have already opted out of many of the most damaging consumption practices — this movement will give them a way to more easily explain these decisions to both their friends and the many corporations that might not even know they are being boycotted already.  In a way, we can think of this as micro-targeted boycott in which everyone thinks more about what companies and organizations they do and don’t want to support.  By thinking about all of our spending choices, we will also find more ways to build and strengthen existing institutions that are doing good work.  We might see a rise in small businesses, or coops or social enterprises.  We might see more charitable donations in place of traditional gifts.  We might see more community-supported agriculture.  Some organizations (such as the Center for a New American Dream) are calling for this kind of a shift for its own sake, without any political or partisan motivations — just because it would make a better world in and of itself.  There are already many organizations out there that put values before profits, and a general shift in spending will encourage people to seek out those that make sense for both their worldview AND their day-to-day life.

A NOTE ON THE NAME:  There is another campaign in the UK using the same phrase to protest sex trafficking.  It is an admirable campaign, but not one I had heard about before googling around in search of uses of #IMNOTBUYINGIT.  They are doing good work, but there is no formal association between the two campaigns.

Matthew Lie-Paehlke is a PhD student in Urban Planning at the University of Toronto.
View all posts by Matthew Lie - Paehlke →
Gallery | This entry was posted in Uncategorized. Bookmark the permalink.